Randomly in July while getting bored at work I was surfing Copart, a salvage auction site, that I saw a Subaru BRZ that had some hail damage but looked fine otherwise. Getting excited, I registered on Copart and placed a bid on it for about $600, but I lost. Over time I kept losing bids on similar BRZ/FR-S cars and decided to expand my horizons. So I started bidding on Porsche Boxsters with minimal damage, raising my maximum bid limit to $1500. I ended up winning a 2001 Porsche Boxster S (Figures 1-5), with 142,000 miles, for $1400 which had a dent on the rear driver side (Figure 3a and 3b), a broken tail light and was in driving condition. Despite having a Miata that needed work, I took on another project — classic project car mistake 😊 !

However, the total purchase bill was around $2100 with all the paperwork costs that Copart added to the bidding price. Moreover, I was in New Jersey and the car was in Texas. So I had to pick it up within 1 week or start paying storage costs. Copart offers transportation services through their site, and it costs a fixed price of around $1400, and I selected that. I did not know who to use so I let Copart make the choice. Of course, as I got to know weeks later while signing the delivery papers, they picked someone who charged only $950 to Copart. All of this was completed by end of July and on 4th of August the car was picked up by the transporter in Texas and then the trouble started.

These pictures are from the Copart lot in Texas and the transporter took them for me before loading it on to his truck. 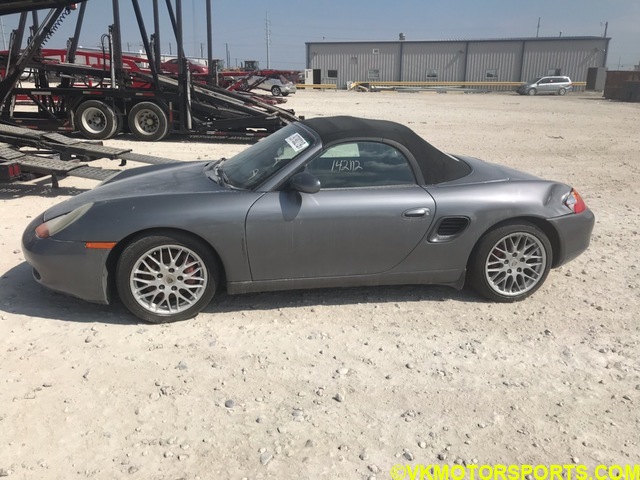 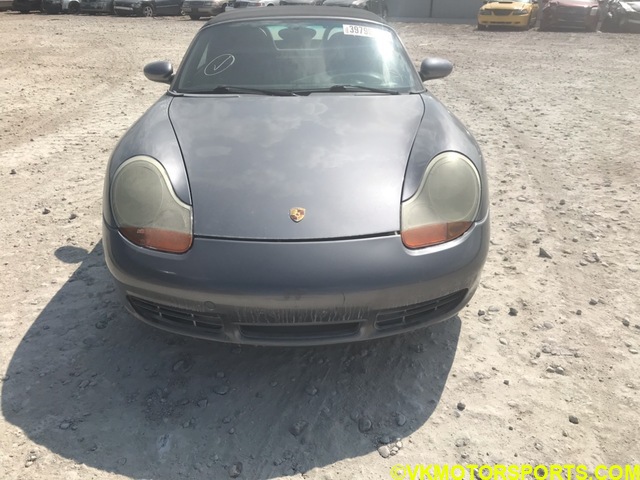 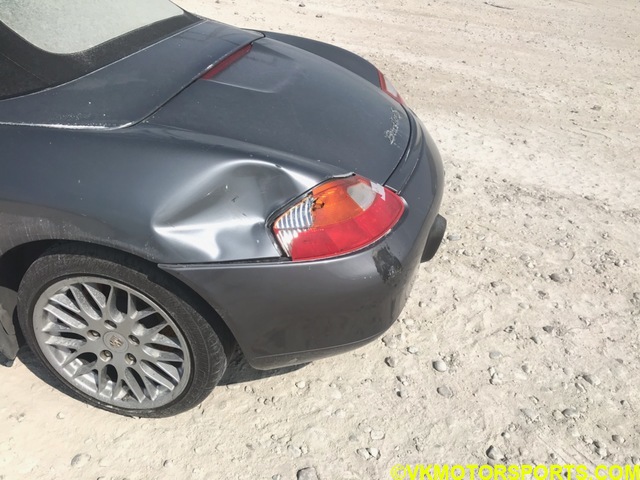 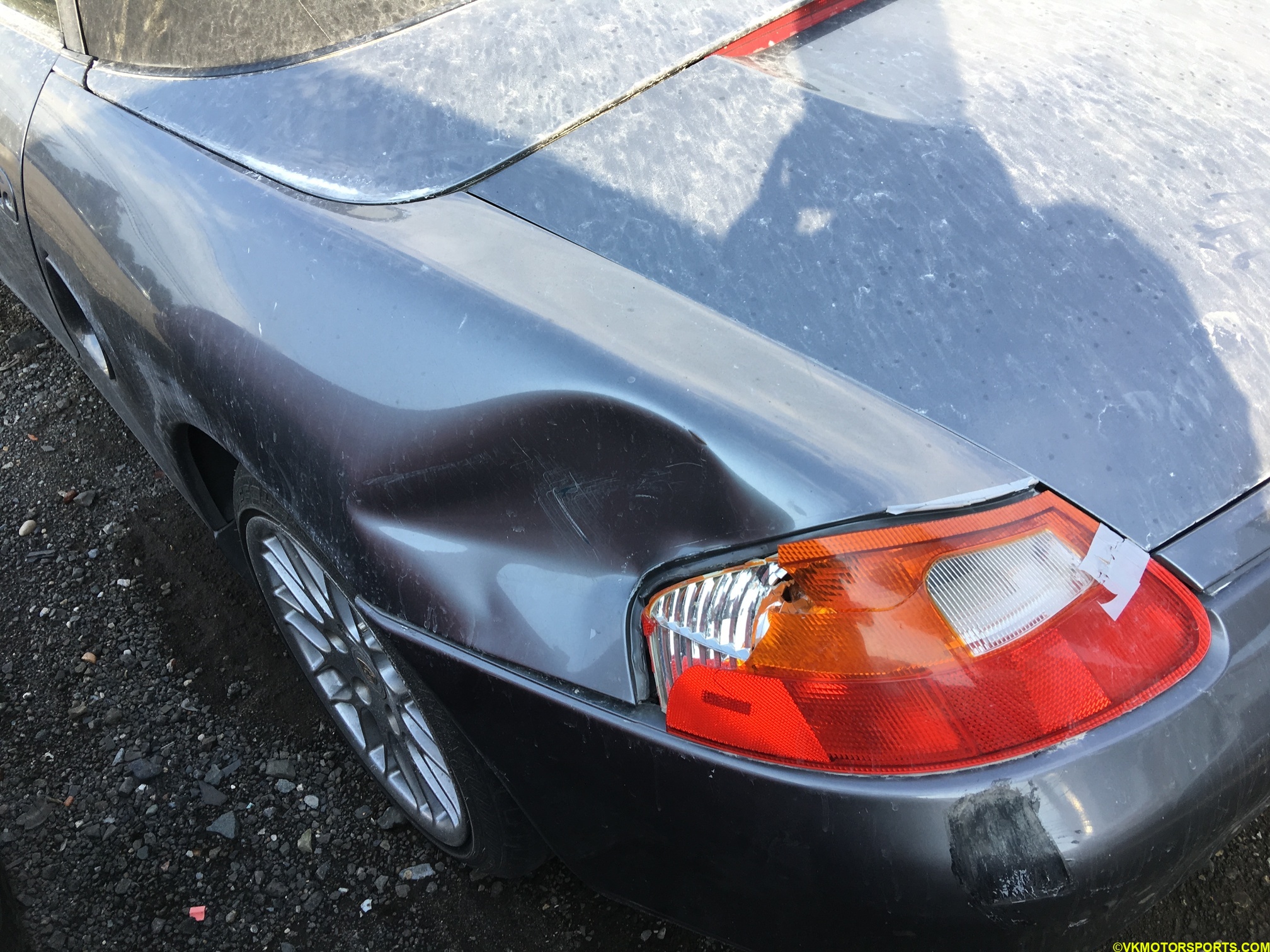 Figure 3b. Close-up of rear damage on the Boxster 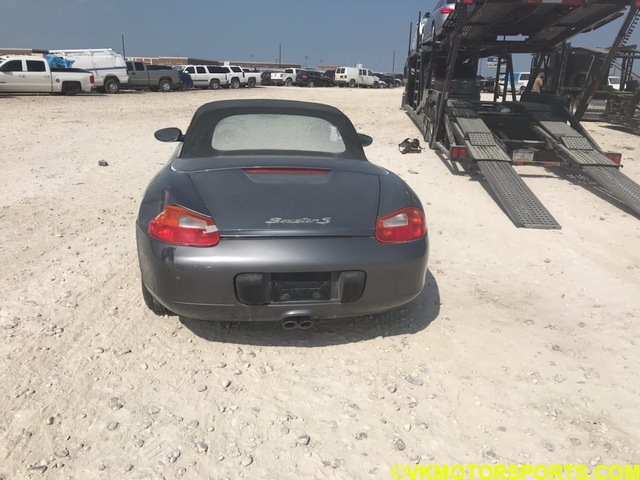 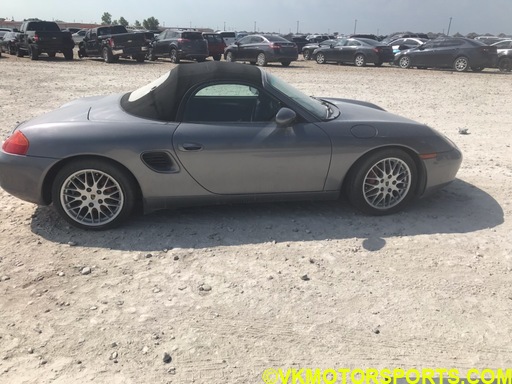 The Trouble With Transportation

At first I received a call on the day of the pickup from the truck driver’s dispatcher that the car was not driving and that they did not want to transport it. I was shocked, to say the least. I assumed that being a Copart approved transporter they would be familiar with picking up salvage title cars. I also was worried that I won a bid on a car that was marked Run and Drive but did not drive. So I just decided to tell the transporter that they need to pick up the car since I had already paid for the pickup and bring it over. Then later that day when the car was picked up they let me know that I would need a forklift (Figure 9) to get the car off the truck when it arrives at my home !

Not knowing what to do I just told them that I would take care of it. I spent the next few days being stressed out about what I would do and where would I get a forklift that could lift a car off a truck (Figures 6 and 7). I did not even know that could be done. I spent time watching Youtube videos and searching the web, and found others who had similar issues with buying non-running cars off Copart from a different state. I spoke to the truck driver a few times while he was enroute to NJ from TX, and eventually the transporter’s dispatcher decided to help me out and found a towing company that would deal with this problem. Turns out professional towing companies, not your local garage with a tow truck, have huge forklifts that can pick off cars from trucks and move them around. Makes sense to have one if you are also towing salvage cars that do not run. One such company was Crew Towing in Carteret, NJ. For a small fee of $150 they would use the forklift and unload the Boxster off the transporter and deliver it to my home, as long as the transporter showed up at their place before 5:30pm that same day. Thank goodness the truck driver made it just in the nick of time.

The forklift (Figure 8) unloaded the Boxster into their storage lot (Figure 9), and I setup a time for delivery to my home and the car was delivered the next day on a flatbed tow truck (Figure 10). Since it did not run and drive, I was able to ask the tow truck driver for help to push it into my garage (Figures 11 and 12) and gave him $30 as beer money. The below pictures were taken by me at Crew towing and my place. 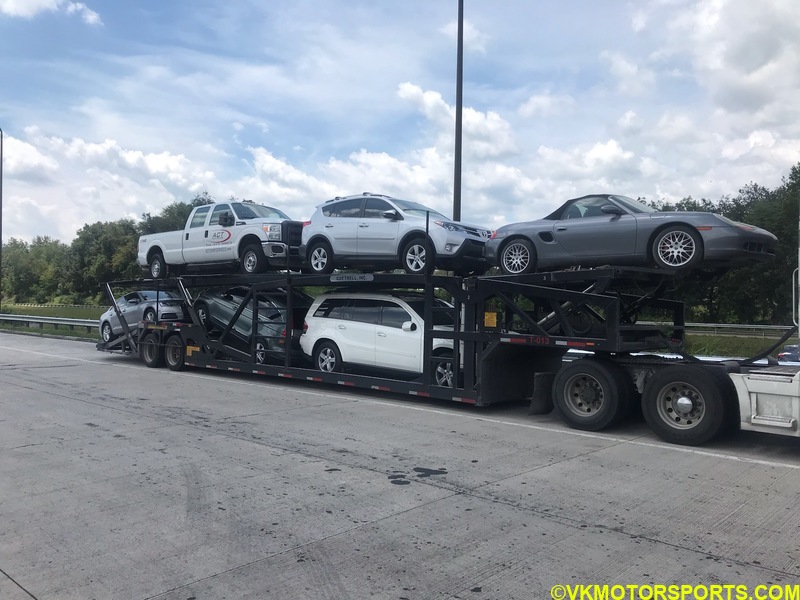 Figure 6. Boxster on the transporter truck 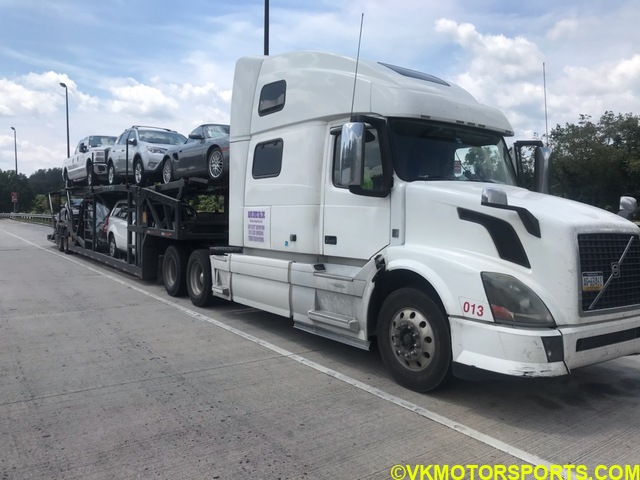 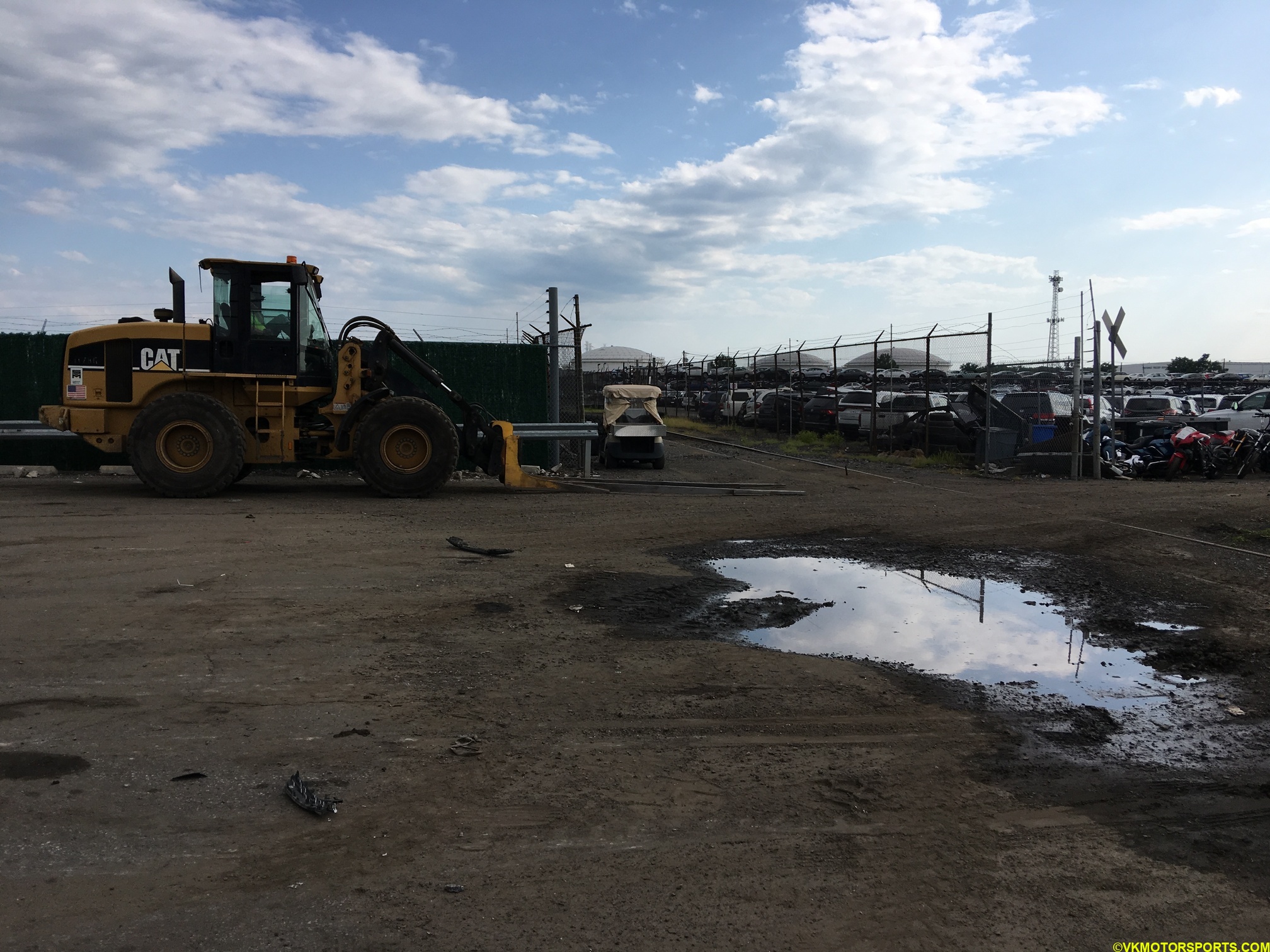 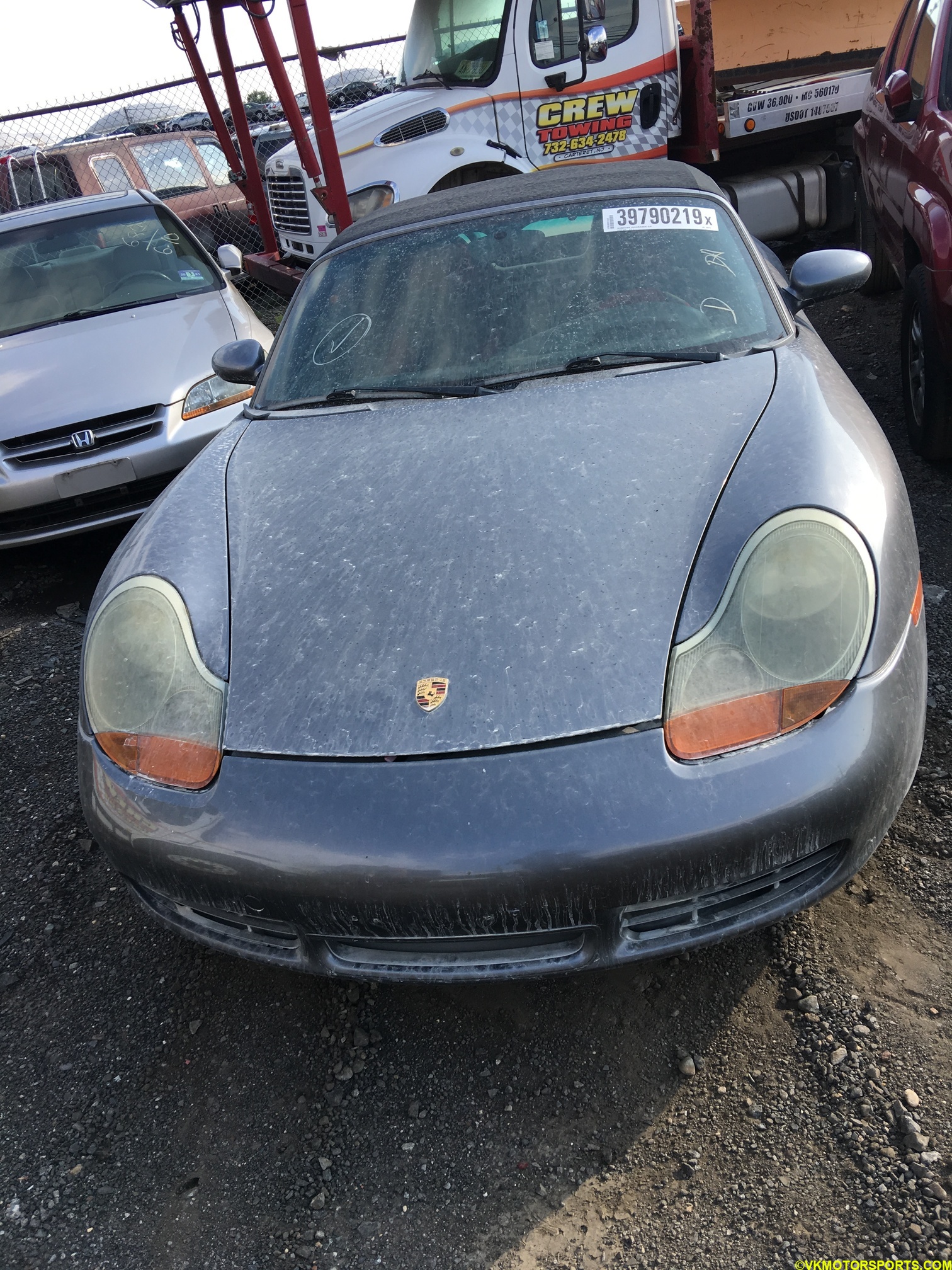 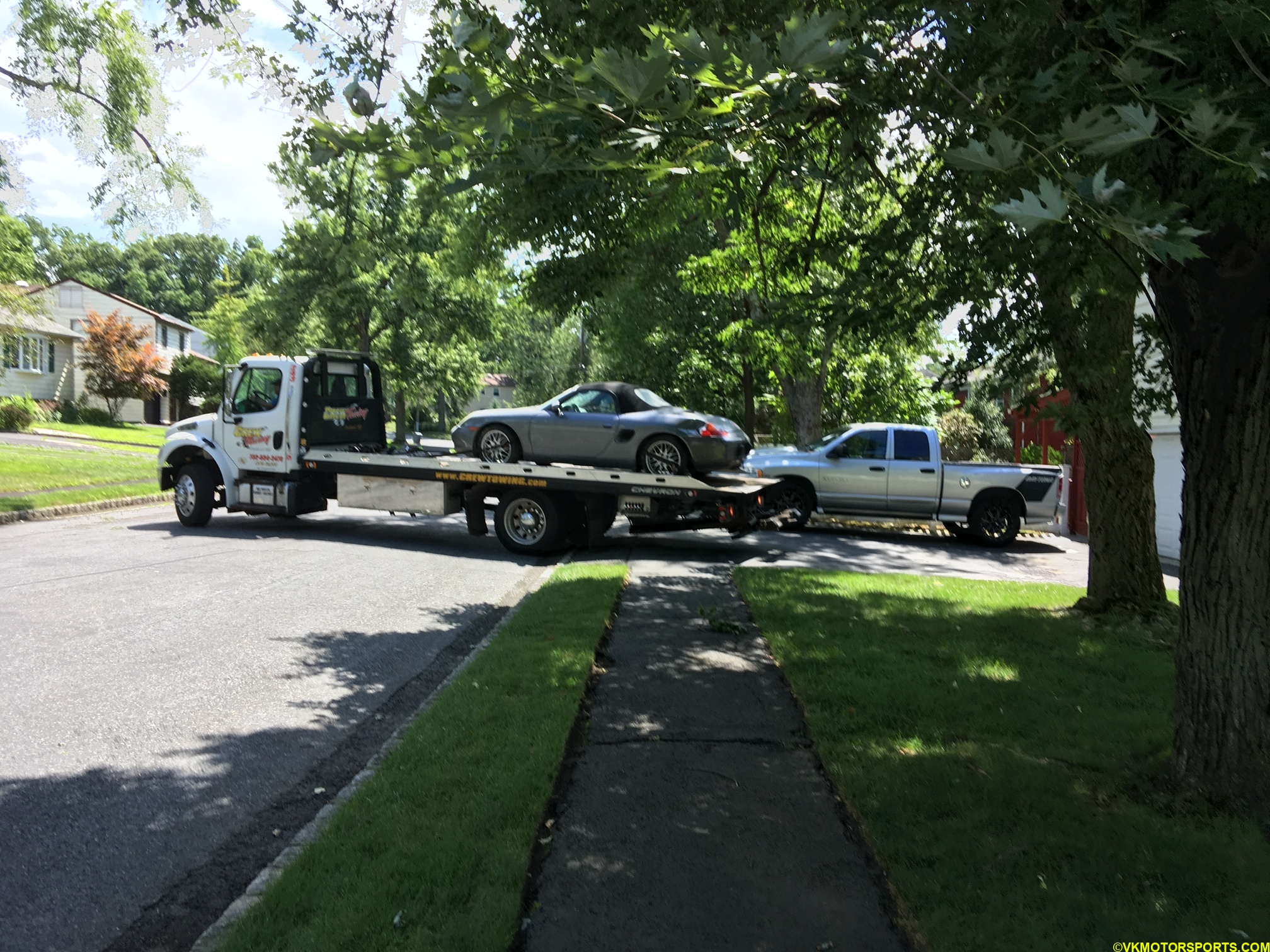 Figure 10. Boxster on the flat-bed tow truck in driveway 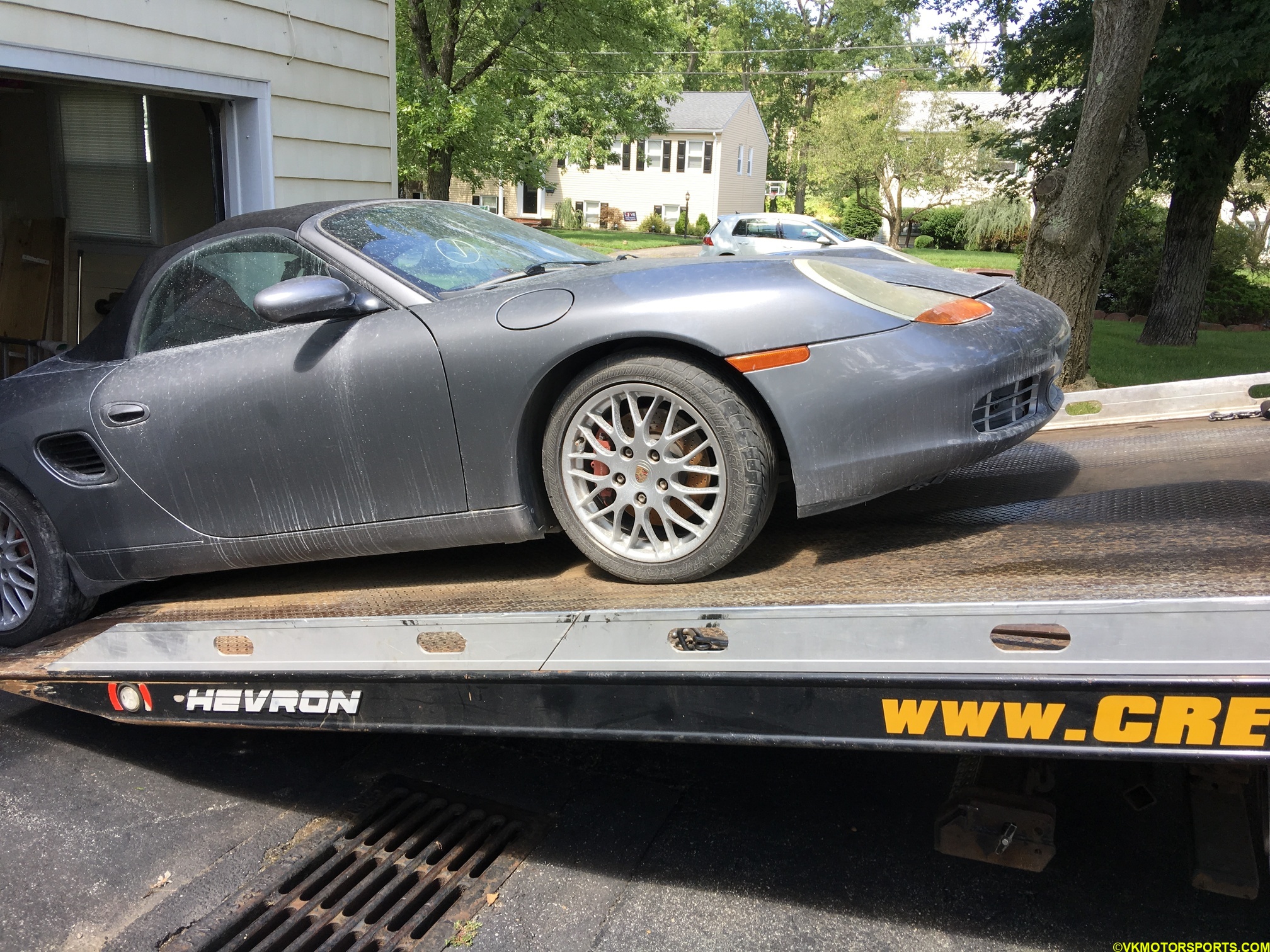 Figure 11. Boxster being unloaded from the flat-bed tow truck 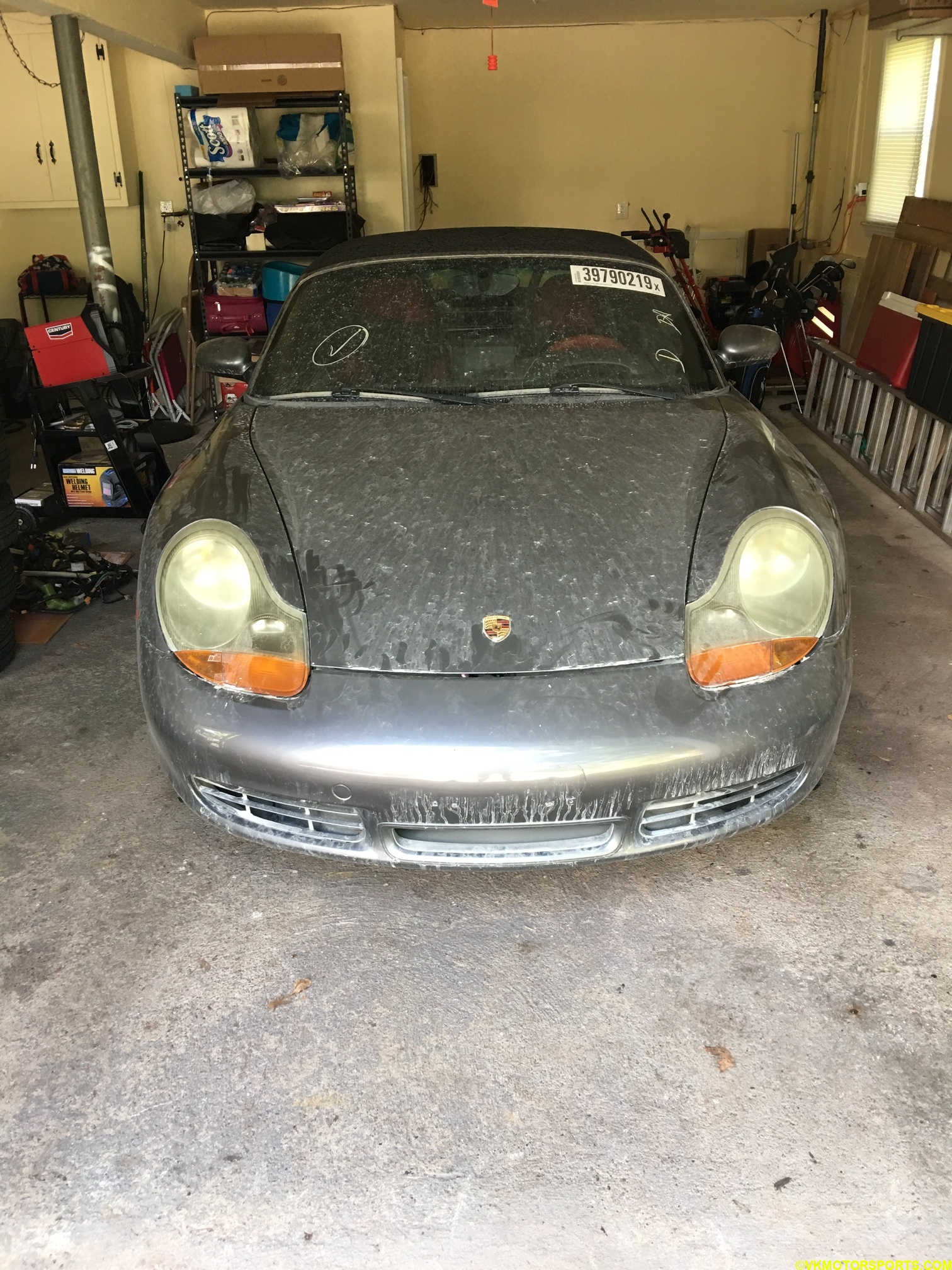 Figure 12. Boxster inside the garage

In all, total cost of procurement of the 2001 Porsche Boxster S was $3,730, including the cost of the car at Copart, the transporter payment and the unload and delivery of the car to my garage. I would say that this turned out to be a very expensive purchase for me for a salvage title car. Let’s hope this beast runs !

Anyway, with some help today I pushed the car out of the garage and washed it by hand. Took 2 hours ! The car was just too dirty (Figure 13), but now looks clean (Figures 14 and 15). Since the tail light was broken and there was a crack in the convertible top window, I used duct tape to cover them up before cleaning (Figures 16, 17 and 18). This way water would not go in.

Eventually I could see the sky’s reflection on the hood (Figure 14), that’s how clean it was. At least that felt good. Next step is to see if the engine runs and the problem is either a dead battery or an empty gas tank, and hopefully not something severe. 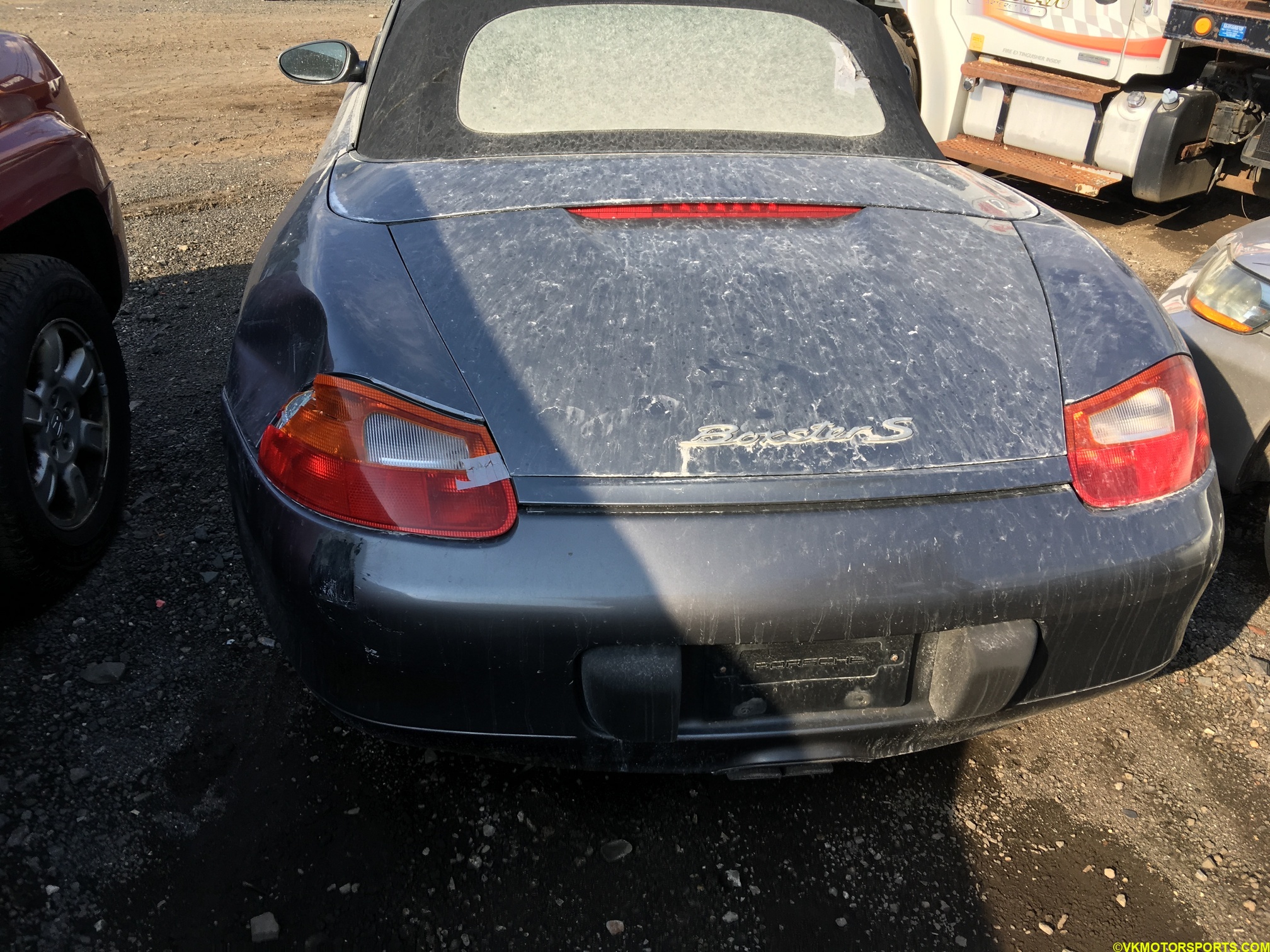 Figure 13. The Boxster was too dirty 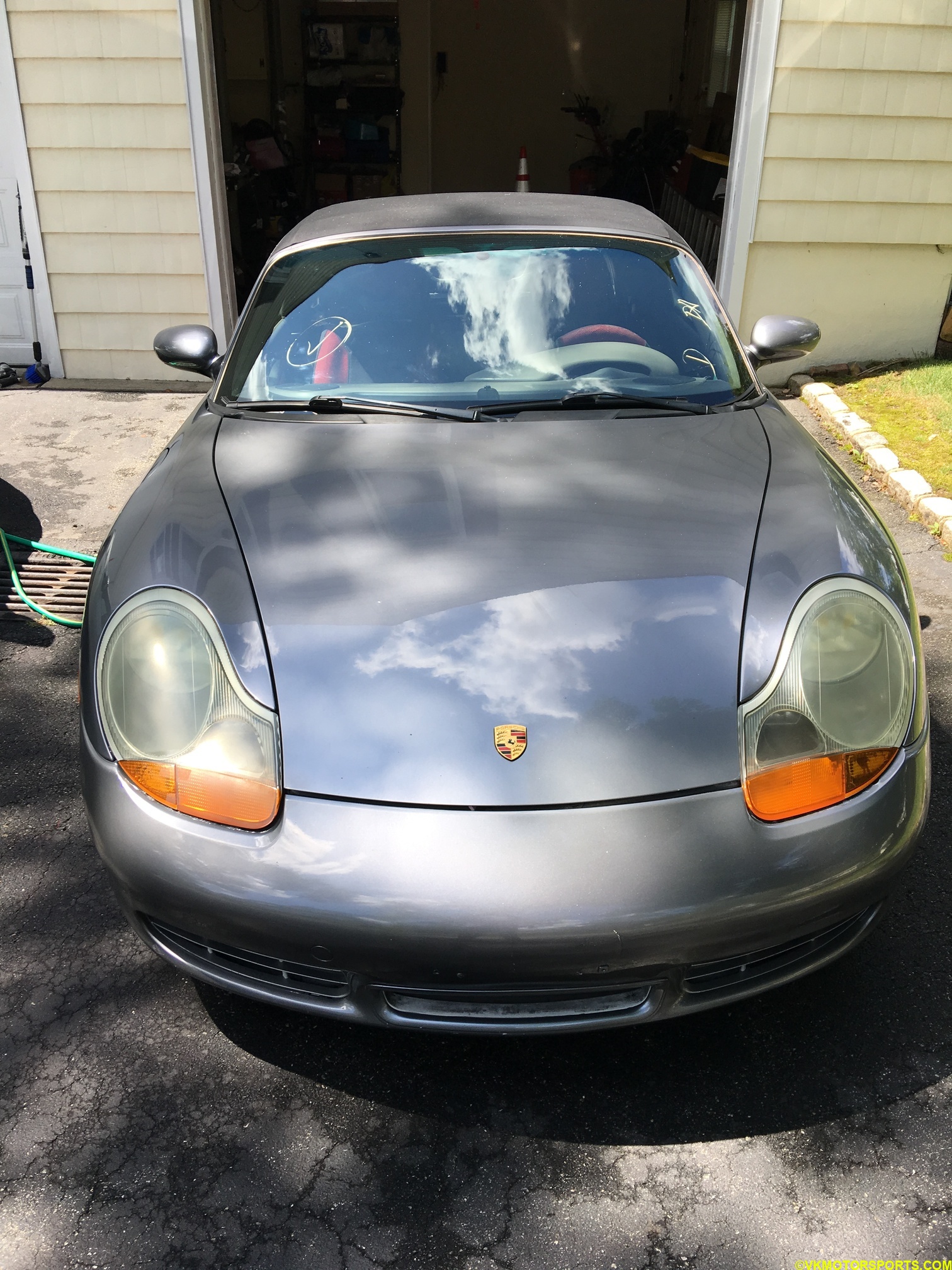 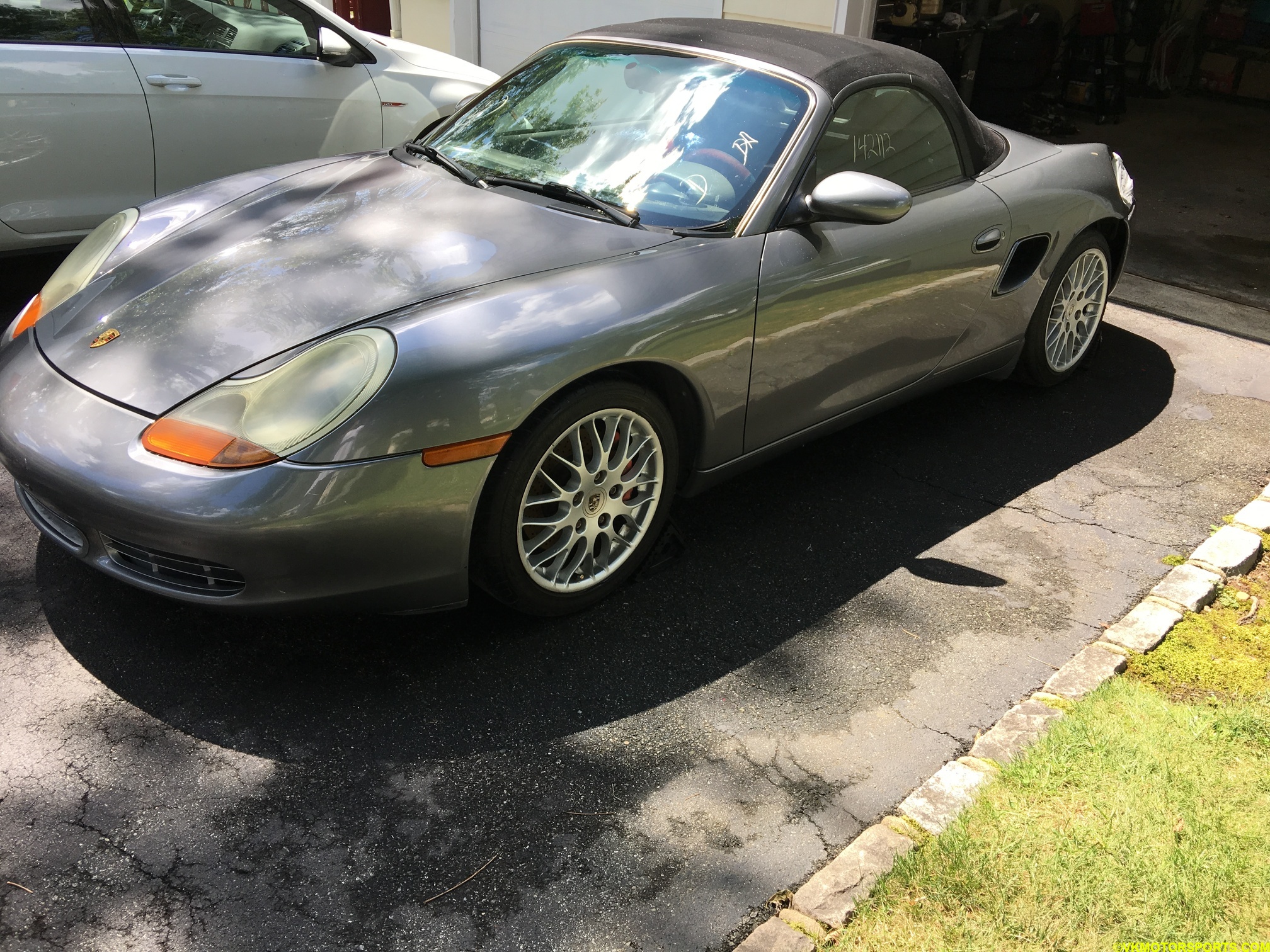 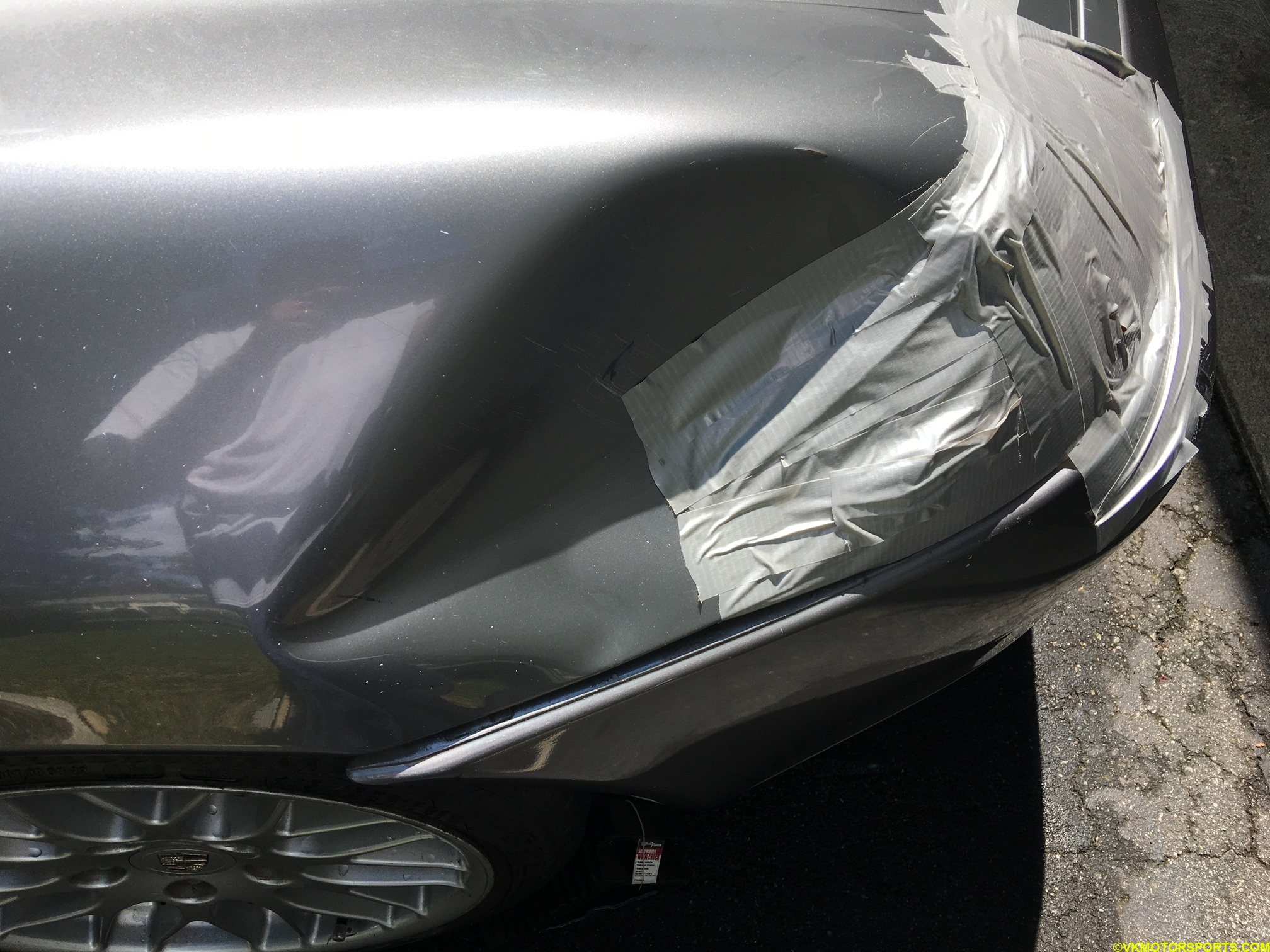 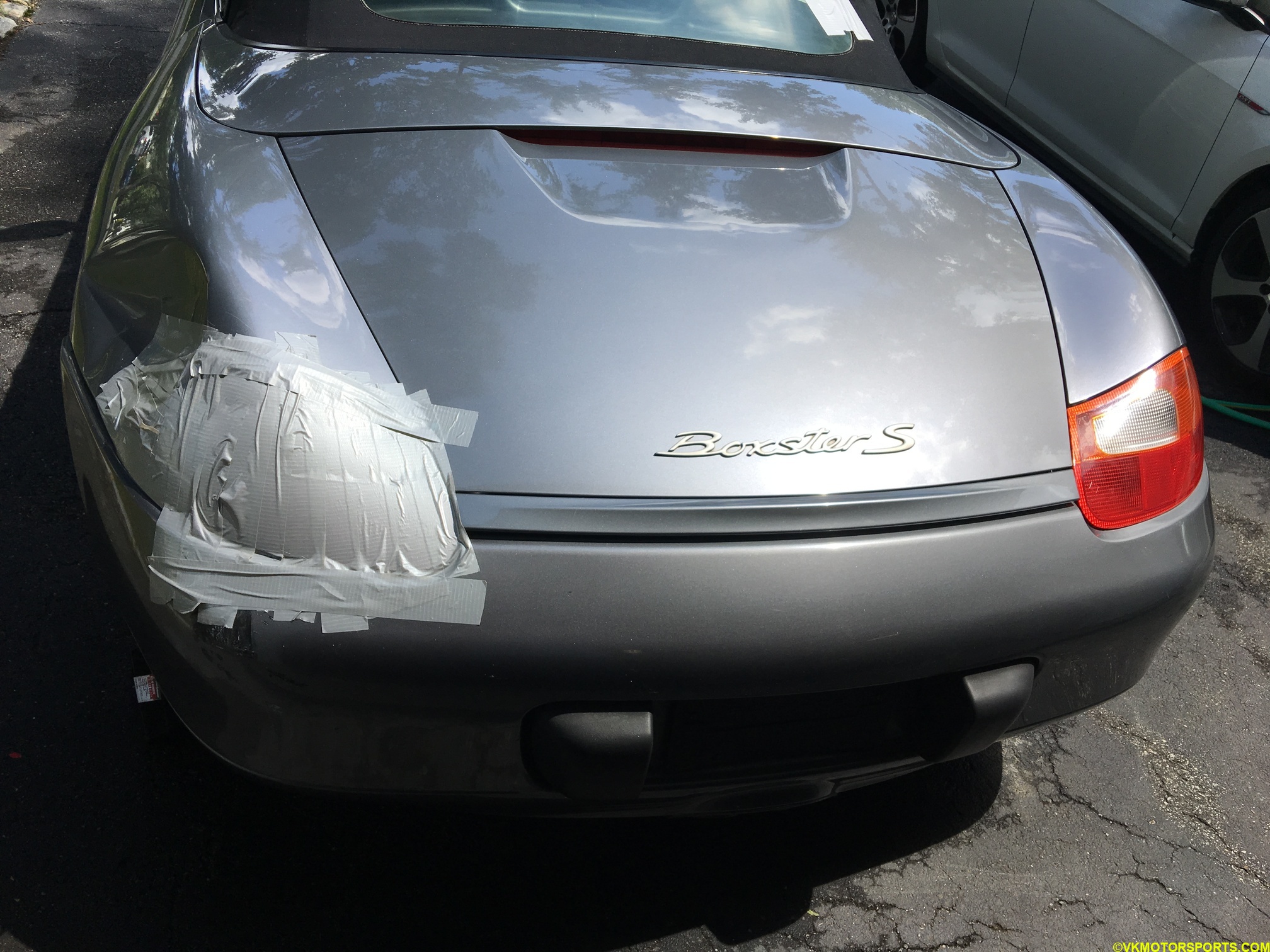 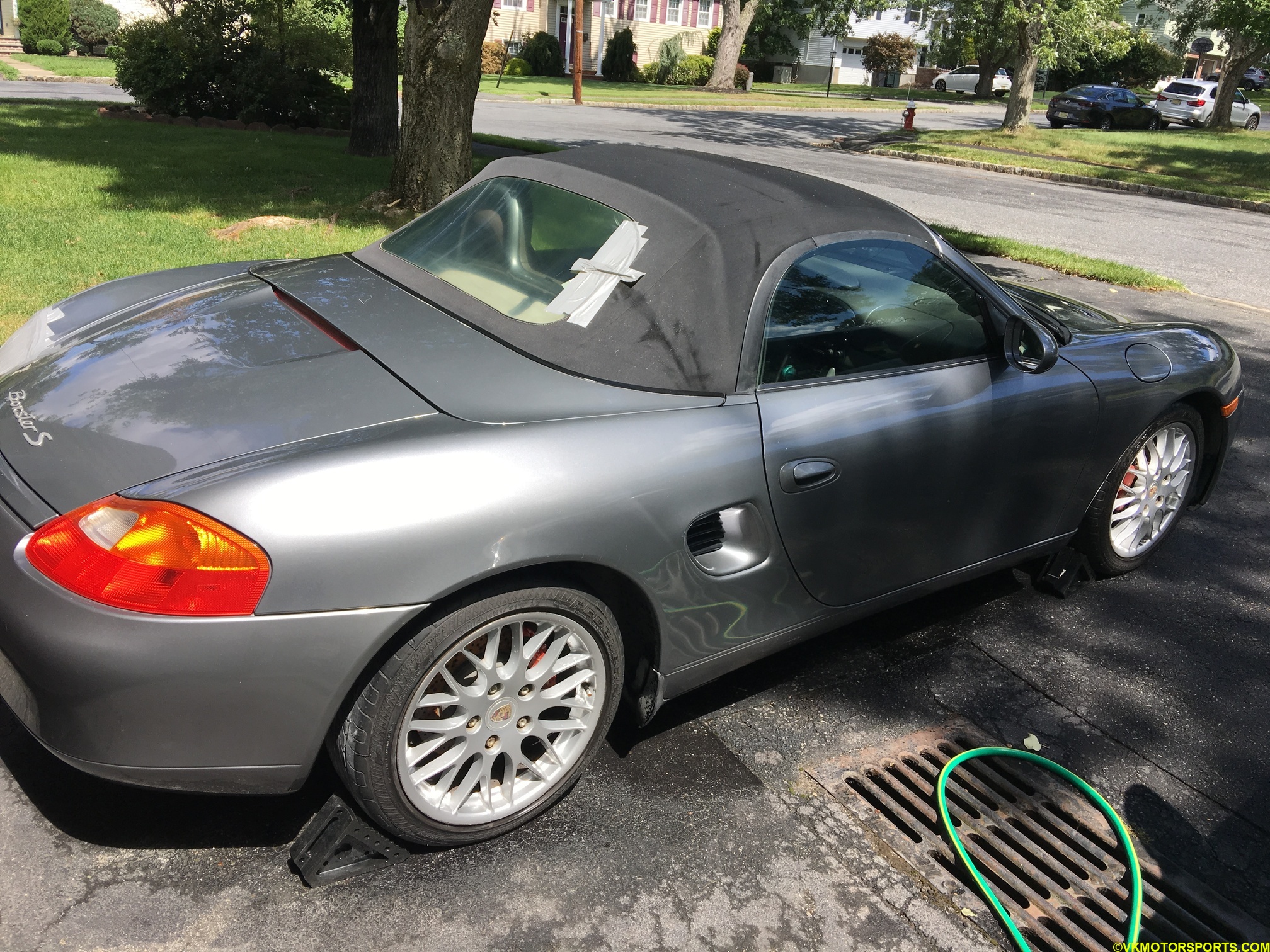